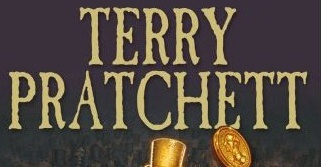 “No British railway train is allowed to depart unless at least one passenger is reading a Pratchett novel.” … famous quote during the 1990s that says much about Pratchett’s popularity.

Terry Pratchett was born in 1948 in Beaconsfield in Buckinghamshire, England. He is best known for his popular and long-running Discworld  series of comic fantasy novels. Discworld is a flat circular world, a planet populated with witches, wizards, trolls, and werewolves, which lays on the backs of four huge elephants who, in turn, stand on the back of a giant turtle, the Great A’Tuin. The turtle glides through space with no apparent feelings about the world resting upon his back.

Even his most wildly hilarious conceits tend to be grounded in basic human nature and elements of modern society, exposed and extrapolated to ever more ridiculous heights.